What is FinTech, InsurTech and HealthTech? – Explanation and basics

The digital transformation of the financial services industry and its explanation

FinTech, InsurTech and HealthTech are buzzwords in the digital transformation of the banking and insurance sector. What lies behind them? And when did digitalization actually begin?

Digitization and financial services are my passion. With digital transformation, both come together. Perfect!

In my first post today, I’d like to start by explaining a few terms and distinguishing them from one another. In addition, I will trace the origins of digitalization a little bit.

The first (mechanical) calculating machines in the 19th century were a logical consequence of the industrial revolution. The forerunners of today’s computers emerged because the need for fast and extensive calculations increased sharply. The equally greatly accelerated development in technology and science, further fueled the development. This is very remarkable because it was precisely at this time that telephony and electricity were just beginning to develop.

Digital transformation is about the fundamental change of an industry and its services through new technological possibilities. This transformation does not only act within an industry. It brings together services from different providers across industries in so-called ecosystems.

This seems natural and logical because financial products are usually “virtual” products. So what could be more natural than making these products “digital”?

The financial crisis and the one or other lapse in the industry caused a certain dissatisfaction and dwindling confidence in the “old” companies. This called new companies (startups) to the agenda. They set out to offer financial services “without detours” and for the benefit of the end customer. The goal was to turn the existing business model of the “top dogs” and the associated market upside down through innovation / technology. There is talk of disruption. Today, it can be seen that most startups are rather in cooperation mode. They focus as customers the established companies and want to support them in the digital transformation and just not replace them.

Of course, there has been digitization and technologization in the financial sector before. Credit cards, ATMs and online banking come to mind as examples. However, the digital transformation is much more far-reaching and far-reaching than these examples.

So what is FinTech, InsurTech and HealthTech?

In the context of digital transformation, we often hear and read about terms such as FinTech and InsurTech. These terms are so-called suitcase words, i.e. words that are made up of two words.

The first part typically describes the content area in question. The terms often end with “tech”, whereby this “tech” stands for “technology” or rather “technology”. So the whole term stands for the technologization of a certain area.

“FinTech” is about the technologization of financial services (“Finance” plus “Technology”), mostly referring to services from the banking environment. Startups themselves that are active in this area are also referred to as a “FinTech”. A prominent example of such a “FinTech” is N26, a German direct bank that offers financial services via smartphone. The former startup now has several million customers and is currently traded with an enterprise value of more than one billion.

The digital and rule-based asset management, the so-called “Robo-Advisory” can also be sorted into the “FinTech” area.

“InsurTech” (“Insurance” plus “Technology”) is the little sister of “FinTech” and refers to the digitalization of everything related to insurance. “HealthTech” in turn stands for the digitization and technologization of healthcare and everything associated with it, such as prevention or rehabilitation.

And what comes next?

In addition to technologization, digital transformation is also bringing together services from different sectors. Healthcare is an area that a life or health insurer also deals with. In this respect, there is an overlap between “HealthTech” and “InsurTech”.

A life insurer also deals with investment and asset management in retirement provision. Consequently, there is an overlap between “FinTech” and “InsurTech” here.

The merging of services from different providers from different industries gives rise to so-called “ecosystems“. Services from banks and insurers are thus combined in a “finance” ecosystem. Consequently, we will soon have to talk about “FinSurTech” here.

I will deal with “ecosystems” and “FinSurTech” in more detail in my next article! 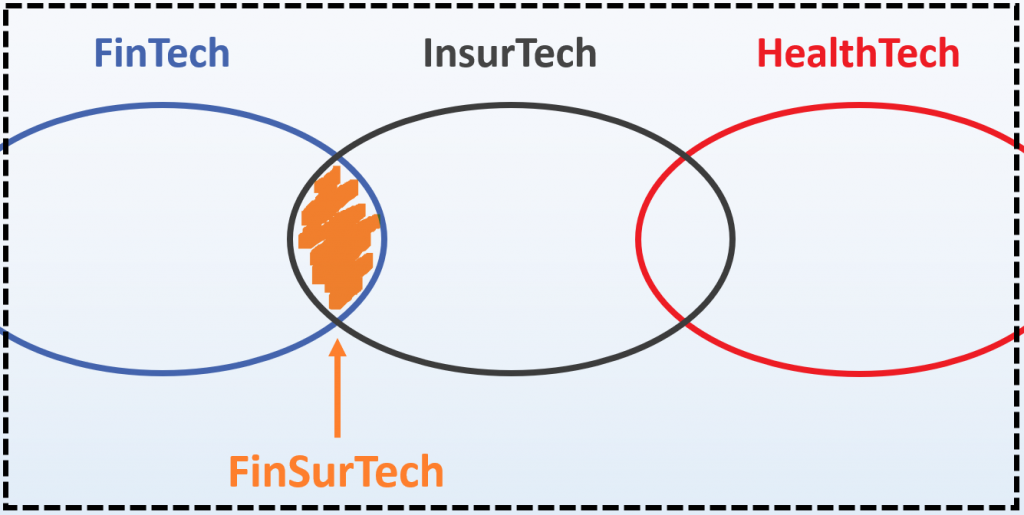 7 steps to a successful hackathon

4 reasons why personal instant messengers will conquer the enterprise world

Hammer or nail: How digital tools define the sales process

Developing a digital mindset: 3 steps to shaping the learning culture of the future

IoT toolkit – The 3 building blocks of every IoT solution

Digital Mindset – 4 Steps How to Solve the…

PDCA – the universal formula for change?