Company of the future

The crisis is taking its toll on companies. And yet it is important to continue thinking about the company of the future. These 5 topics should come into focus now.

The Covid 19 pandemic continues to take its toll on many companies. Entire market segments are down. Supply chains are repeatedly interrupted. Production management is becoming an adventure. Cash flow is a stormy sea for many companies. The economic data – as everyone knows – is not rosy, to say the least, but in any case more volatile than usual. In other words, the profound changes in the markets have long outstripped companies’ ability to adapt. And this is all the more true in times of global crisis. The organization of work has to be adapted again and again to infectious events – the key words here are lockdown and home office. The list of such imponderables could be continued indefinitely.

There is no question: The year 2020 does not allow companies any respite; tactics inevitably take precedence over strategy. And yet, now is the time to look beyond the pandemic and think about the company of the future and bring the essential issues back into focus. The world does not stand still. So where to start with long-term alignment?

The corona virus and climate change mitigation have a paradoxical interaction. On the one hand, Covid-19 has pushed climate change out of the headlines and thus somewhat out of awareness, further threatening the goals of the Paris Agreement. In this perception shadow, for example, more tropical rainforest has been cut down than ever before, mostly illegally and undisturbed, as Corona-induced many controls have failed and corruption has flourished.

At the same time, the 2020 lockdowns, contact and travel bans have shown how quickly environmental parameters improve when consumer society slams on the brakes. In the Venice Lagoon, the water cleared. Emissions of greenhouse gases fell by 4.6 percent worldwide, even though people were once again traveling more in private cars.

This is where we need to pick up, because when it comes to the climate, there is no turning back. And action must be taken now. The recurring complaint in Germany that ambitious climate targets are jeopardizing competitiveness sends out the wrong signal. The country of inventors and engineers, in particular, should take a prominent role, actively occupy it and lead the way with market-leading climate protection, climate-neutral products and ecological innovations. For responsible entrepreneurs, this strategy will pay off. Fortunately, many companies have long chosen to be part of the solution, not part of the problem.

2020 is not only the year of the pandemic, but also the year of hashtag #BlackLivesMatter. Founded in 2013, the movement – inspired by the U.S. civil rights movement – has seen an increase in people around the world joining demonstrations and expressions of solidarity in the fight against racism and oppression since the violent death of U.S. citizen George Floyd in May.

In the U.S., there is yet another expression of the injustice that the African-American population has been much more affected by Covid-19 and has suffered significantly more deaths than the white population. At the same time, in addition to the obvious and brutal exclusion, the readily overlooked, tacitly tolerated, institutional discrimination comes into sharp relief. Many people still do not have equal access to education, jobs, and career opportunities because of the color of their skin, their nationality, their gender, their religion, or their sexual orientation.

The result of this structural disadvantage: Companies and organizations that do not promote diversity, or do so only hesitantly, are giving away enormous potential in terms of talent and skills, as well as inter- and intracultural skills, which they urgently need in the globalized and interconnected world. Increasing adaptability is the decisive goal from a business perspective. Only diverse and multi-layered teams can interpret the complex and often unpredictable signals of the markets and translate them into economically sensible action. In other words, “customer centricity” – i.e., the efficient alignment of all processes with the customer – can only be achieved by diversified teams and not, to put it exaggeratedly, by old white men at the head of a company.

The product of the year 2020? Protective masks. Small tailoring and fashion businesses started production because their customers could no longer come to them for shopping. Industrial companies did the same, because the value chains in their industries were torn, at least temporarily, and they needed to generate revenue quickly. It’s worth giving some thought to this.

The ability to change that many companies displayed in 2020 is advancing to become a core competence. The companies of the future must be able to react just as flexibly to global crises, economic wars and geostrategic challenges as they do to the sometimes erratic behavior of customers and markets. Entrepreneurial strategies are subject to ever shorter half-lives. This requires a decisive, pragmatic solution orientation. This requires recognizing signals at an early stage, interpreting them and translating them into action. Everything is in flux. Supply chains are shifting. Companies are bringing the production of supplier parts from the Far East back to Europe and Germany. And accelerated by the digital transformation, especially the “Internet of Everything,” the once clear boundaries between industrial and consumer business are disappearing. New alliances and networks are emerging on both the producer and buyer side, and entire stages of the value chain are disappearing. “B2C is the new B2B” is a frequently quoted thesis – and it’s true.

Quite rightly, the digitalization leaps made by many companies in the Covid 19 pandemic were widely praised. What had long been an agonizing process that dragged on for far too long, namely making work organization more flexible through technology, succeeded in the spring in the blink of an eye with home offices and video conferencing. This progress only scratches the surface; it is far from the digitization push that the German economy needs to remain competitive in the long term. The challenges are of a different caliber:

These are all questions that determine a company’s future prospects. They are not about digitality at any price and certainly not about showcase projects. Rather, it is about mastering the very own task of every entrepreneur, even in the digital age: Developing competitive advantages.

The relationship between business and society is changing fundamentally in the 21st century. The old saying “When business does well, everyone does well” has had its day. This market-liberal attitude implied too much of a radical core that allowed companies to strive for market share, sales and profits, detached from social developments. The consequence was and is that the gap between rich and poor is widening, so much so that even the International Monetary Fund is sounding the alarm.

Moreover, surveys repeatedly show that even in successful economies like Germany and the U.S., more than half of the people no longer believe in capitalism. When this skepticism combines with irrational conspiracy theories and protest attitudes in a deep crisis like the Corona pandemic, an explosive mixture can result. By its own self-image and because the passage of time demands it, the economy must make a change: away from shareholder value and toward stakeholder value. A change in thinking in which, according to the Edelmann Trust Barometer, 92 percent of all German citizens now see the basis for long-term business success. They demand competence and attitude, ethics and solidarity.

Entrepreneurs who have not yet developed or found their role as a corporate citizen in the “stakeholder economy” should do so now. Those who fail to do so will be punished by the markets and will also damage their employer branding: Young generations will choose their employer on the basis of social commitment.

The company of the future: how to make the change happen

The key to these five fields of action? A participatory culture and an attitude that is committed to participation. This requires genuine innovation management and, above all, sustainable knowledge management.

Many managers are currently coming to the overdue realization that their once tried-and-tested patterns of action no longer work. Yesterday’s solutions are no longer needed for today’s problems; many employees can no longer be reached with empirical knowledge. Instead, they want to be picked up exactly where they currently stand in the coordinate system of pandemic, digitization, recession and corporate policy. Instead of providing answers, managers urgently need to create an environment in which people are happy to make a positive contribution on their own responsibility.

At the same time, it is important to create a sense of purpose, to convey an overall picture to the workforce, and to provide extensive transparency regarding projects and strategies. Only in this way can teams and employees act prudently in these challenging and complex times. 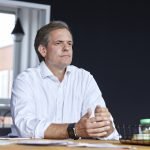 Dr. Thomas M. Fischer is founder & CEO of Allfoye, member of the Management Board of the All for One Group, Chairman of the Institute for Leadership & Transformation as well as startup founder, coach and investor. As an expert on digitalization and the future viability of medium-sized companies, he is a regular guest on the SWR Podcast, nTV or WiWo. He likes to share his ideas and impulses with the MoreThanDigital.info community. #LinkedIn

Go for it – Implementing digitization without bells and whistles

5 Trends as drivers for the digital transformation of all industries

Is there a “burnout personality”? – Explanation and 6 measures for…