Digitalization as an opportunity: 5 theses on how it contributes to Leadership 4.0

A look at the new, digital leadership culture and what opportunities digitization offers

The massive changes in the age of digitization are taking managers into a new world, whether they want to or not. We need a new perspective on leadership if we want to help shape change instead of being exposed to it while complaining. With this in mind, I have formulated 5 guiding principles that place leadership in a new frame of reference. I would like to set impulses for newcomers who have hardly dealt with the topic so far.

The massive changes in the age of digitization are taking managers into a new world, whether they want to or not. Leadership as a task in a hierarchical structure becomes leadership as a guiding value in a person’s self-management.

We need a new perspective on leadership if we want to help shape change instead of being exposed to it while complaining. With this in mind, I have formulated 5 key ideas that place leadership in a new frame of reference. I would like to set impulses for newcomers who have hardly dealt with the topic so far and initiate a deeper discussion.

1. More awareness instead of more knowledge

In fact, it has not yet arrived everywhere: Digitalization is not an IT project!  Digitization is “only” a word for the comprehensive paradigm shift that is taking place globally. We have been experiencing the collapse of structures in various areas, systems and levels for years.

On the political level, structures are disintegrating: the Eastern Bloc, the Wall, alliances of states have dissolved. Who would have thought that reunification would be possible?

In the medical sector, paradigms that seemed immovable are falling: Epigenetics is just proving that genes are not destiny. We hold the keys to gene expression in our hands every day – which means we decide for ourselves whether a disease breaks out or not.

Communication is becoming borderless thanks to social media. With the click of a mouse, we can contact people who were previously hidden behind insurmountable barriers.

The computing power of computers doubles every 2 years according to Moore’s Law. Knowledge doubles at least every 5 years. And it is no longer hidden behind the doors of the ivory tower. “Knowledge is power” no longer applies.

When any information is just 5 mouse clicks away, it is all about finding and applying the knowledge. Know how! The ivory tower has been broken open and we have free access. The only thing that matters is whether it interests us enough.

We don’t need even more knowledge, because it is already growing exponentially, analogous to the computing power in Moore’s Law.

Digitalization is not an IT project! We are in the middle of the collapse of the old world. And we should cultivate pioneer thinking. We can shape the upheavals with more awareness. This requires a so-called higher consciousness that takes into account that everything is connected. An awareness of the systemic, inner connections of the world and how we maintain this world.

Above all, we need more Know-Why instead of Know-How.

A higher consciousness connects instead of divides. With the beginning of industrialization, we started to divide work and life. This was not the case in the rural society before.

Today, as a result, we talk about work-life balance. What sounds helpful is unfortunately only the symptom of an unhealthy separation of work and life. We create an imbalance in order to bring it into balance afterwards at great expense.

Why not give life more quality in general? Leaders who do not balance work and life will not be able to initiate sustainable performance quality in their company and among their employees. Because the law of resonance also applies here.

Unbalanced or missing self-leadership carries over from the head into the body – on a company level as well as on a personal level. The fish stinks from the head, as the saying goes. The solution is to set an example of life balance. This creates satisfied employees in the team, who also manage themselves well. This creates more benefits for everyone: employees, managers and the company.

3. Right to participation instead of right to work

The right to work is a postulate from the era of industrialization. Digitization will further erode this right. At present, attempts are still being made to generate more work by boosting the economy through consumption incentives.

But the claim of full employment belongs to the bygone era of the industrial revolution. There will no longer be enough work for everyone. We need to redefine work.

Robotics, AI and other technologies are reducing the quantity of work. Instead, the need for qualitative work is increasing.

Sharing economy is not a trend, but the future of sustainable work. This planet cannot tolerate even more consumption. This planet needs to refrain from permanent economic growth, as its resources are not only limited, but already depleted in many areas. Trying to create more work with more consumption is backward thinking.

We don’t need more stuff. We need a fairer distribution of the use of things. Digitization is creating the necessary tools for this.

Hierarchical structures are largely obsolete. Digitization enables the participation of users, producers and managers at all levels. This means that the usual structures will disappear.

At a time when it is possible to share all information worldwide, the power of individual cells is disappearing. It is no longer imperative that the elements of a value chain within the same company are organized under the same management structure. A company is no longer needed for a meaningful enterprise; a project-based organization led by an agile leader is sufficient.

This means that those who are able to network well and in a results-oriented manner are well positioned for the digital world.

If you can’t lead yourself, you won’t be able to lead others. Alfred Herrhausen already stated this – and it still applies today. We all live in an uncertain and unsettling VUCA world. Leaders, in particular, must demonstrate tremendous adaptability to constant change and personal resilience. Personal health is becoming a powerful factor in self-leadership.

This is demonstrated by the work of economist Nikolai Kondratieff. He identified long cycles of economic development with reference to a key technology. The so-called 5th Kondratieff had its peak in the 80-90s and drew its driving energy from the development of computer-based IT. The world became a village in terms of information.

Currently, economists who continue this theory see the cycle of the 6th Kondratieff characterized by psychosocial health and biotechnology. They explicitly exclude the classical health sector here because it views man as a biomachine and has missed the connection to the findings of physics and quantum physics. Simply put: the human being is responsible for his or her own health and maintenance of performance. Psychosocial health! This means that the leverage effect does not come from a technical development, but from a behavior, a way of life. The scope of this leverage will become apparent in the future.

Agile leaders lead themselves and indirectly their team by being role models in health responsibility as well. See Thesis 2.

Globalization and digitalization are connecting us in new structures. If we put this realization into a different frame of reference, then the sentence “we are all connected, we are all one” can no longer be understood spiritually. Then this sentence reflects the world as we experience it today.

We act as if in a hologram, where each part is a smaller version of the whole. We all have full responsibility for ourselves, our work and our results – and how we treat this planet.

Digitalization is the greatest design task of our time, writes Karl-Heinz Land in Earth 5.0. The crucial question will be with what attitude people accept this challenge.

So let’s create a new leadership culture with authentic leaders who live up to their role model function and become active co-creators of change on the basis of emotional intelligence and with the appropriate values. That’s what I call Leadership 4.0. 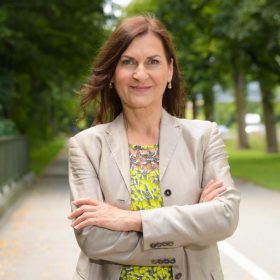 A strong Corporate Identity due to Community Building

Management of organizations in the era of great transformation

Is the media “out” as an employer? – Recruiting in the media…

Digitization in procurement – what is our current status?

Digitization is changing SMEs and their opportunities