Distributed ledger technology is the basis for all current systems such as Bitcoin, Ethereum, Litecoin, Hyperledger, etc. But what is it? What does Blockchain mean, and what are Smart Contracts? We help against confusion and explain the principles of crypto technologies.

The economy is increasingly flooded by Blockchain, Bitcoin, Ethereum, Crypto, and many other terms. However, these terms are often used as synonyms, which actually have nothing at all to do with them. This article should help to bring some clarification into all the confusion and explain the most important terms like blockchain, smart contract, and other distributed ledger systems.

Basically, distributed ledger technologies, on which all known systems such as Blockchain, Ethereum, Hyperledger, etc. are based, are quite easy to explain. Computers that are networked with each other jointly conclude a consensus on their available data. Information is stored on different systems, verified, and, if necessary, adjusted by common consensus. Distributed ledger technology can also be regarded as a decentralized accounting system. Each computer keeps its own accounting, compares it with the other computers and only if the majority have the same value, then this is also saved permanently.

This joint coordination can take place at different levels (so-called consensus protocols). Thus, also different systems like Blockchain, Ethereum, etc. were developed which are based either on Proof of Work, Proof of Stake, or Votes/Majority decisions. Distributed ledger technologies, no matter which consensus protocols are used, can be processed publicly, privately, or also hybrid.

Public Distributed Ledger means that computers in a network are either disseminated via the Internet to private individuals, who process the information and verify the transactions. Typical examples of a Public Distributed Ledger System are Bitcoin, Ethereum, Litecoin, etc. Each of the so-called “miners” receives compensation for the effort of his computer, which he has with the processing of the data. This also means that certain transactions are generally subject to a fee, as the miners have to be paid. Another important aspect of public distribution is trust. To gain confidence, the consensus protocols described above must be followed.

Or in return, only one computer is allowed in a private distributed ledger system. This means that only controlled systems are allowed to process this information (e.g. company servers). These systems are ideal, for example, for very system-critical processes and also to avoid high public system costs when numerous miners are not required. In general, 3 servers are usually sufficient for a redundant and secure system.  These servers are then verified and trusted as verifies.  This means that no additional consensus method has to be carried out, which ultimately saves considerable computing effort.

Hybrid Distributed Ledgers combine both worlds and can ensure that the data is distributed permissionless via the public network, but only certain parts are processed by verified systems (permissioned).

To get a better overview of the various technologies, we have compiled a list of the most important things about public and private distributed ledger systems. 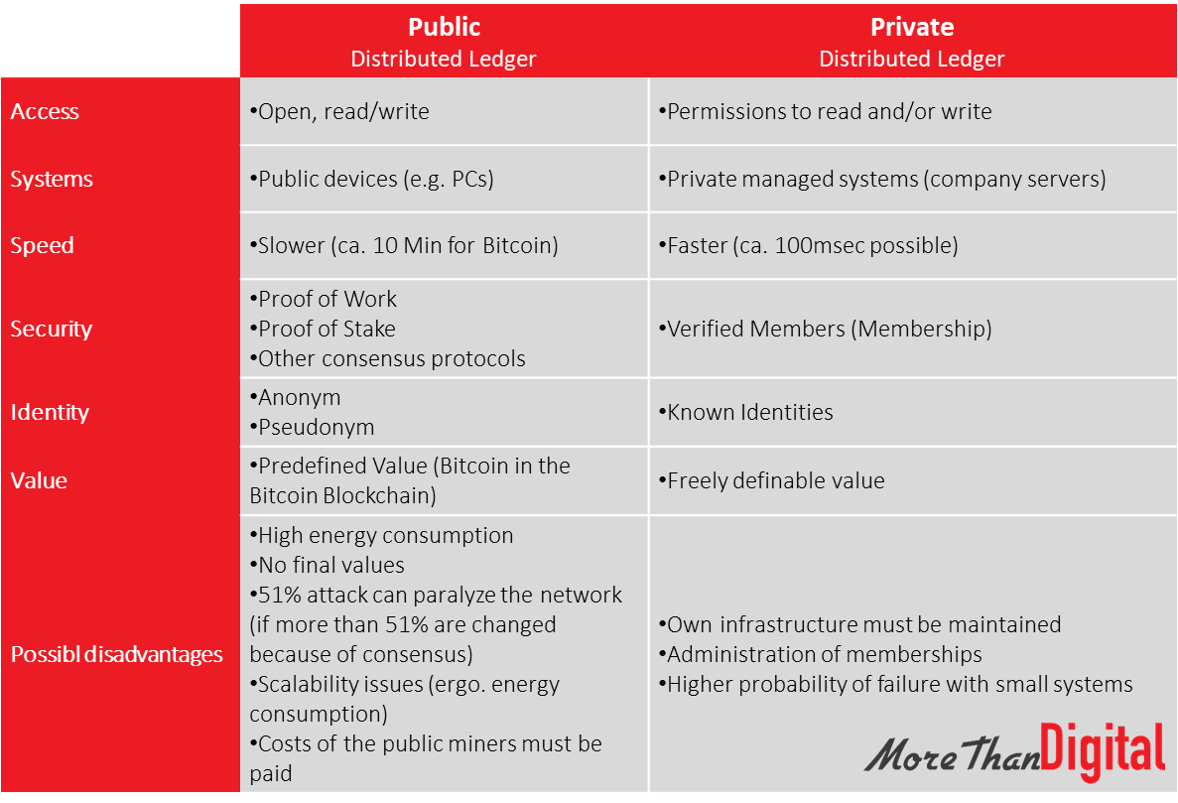 In the news, you usually only hear about certain parts of the blockchain. Mostly it is the cryptocurrencies, which should be used to compensate for the expenses of the miners. However, all these technologies are predominantly based on distributed ledger technology. A secure and widely used accounting system that can also be used for other purposes.

For example, special services can be set up based on these public or private ledgers. This data is then distributed, made accessible, and verified in one of the systems. For example, these can be used in logistics to track products that are accessible to everyone.  It gives people the ability to track drugs to identify possible counterfeit drugs. It is also possible to make contracts or other documents available online for all those who have a key to this document. However, contracts can also be made intelligent. Such so-called smart contracts can fulfill various functions and facilitate international trade, for example, since ownership, insurance, payments, etc. are automatically triggered at certain checkpoints if goods exceed these. Here you can read more about the application possibilities of the blockchain.

What are Smart Contracts?

In short, smart contracts are contracts that can be concluded without an intermediary, such as a lawyer. So that contracts, sales, payments, and investments are also processed automatically since a smart contract is only triggered if all elements of the contract are fulfilled. For example, a house can be sold and the land register entry is secured by the blockchain. When the currency arrives, the land register entry is automatically adjusted. Thus, there is no loss of time for either party to appoint an intermediary such as a lawyer, trustee, state, etc… Since the contract is only executed if all variables are available for it. Thus, it is also very easy to integrate automatic functions such as expiry dates of contracts, elapsed time, or terms of payment.

Another example would be a rental car. The rights to drive or start the car only start when money has been deposited and the car is available. When everything is fully available, the Smart Contract opens the car and the journey begins. As soon as the car is parked, the driver’s right to use ends, and his account is debited with the amount. This means that each participant in the transaction has built-in security that only works if both parties want it to. 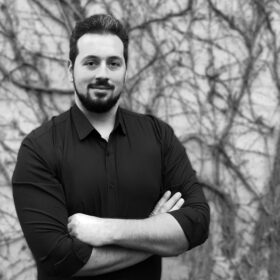 Benjamin Talin
CEO & Founder of MoreThanDigital. Serial entrepreneur since he successfully founded his first companies at the age of 13. He has always questioned the "status quo" and is committed to innovation, disruption and new ideas. As International keynote speaker, consultant for companies and governments & states, lecturer and published digital transformation expert, Benjamin tries to advance the topics of digitalization, digital transformation and innovation internationally.
BasicsBitcoinBlockchainEthereumSmart Contracts
Share FacebookTwitterLinkedinWhatsAppPinterestTumblrReddItEmailPrint

What are Cobots? – Basics and explanation

Dealing with mistakes in a relaxed manner – corporate culture and “German…

Developing a digital mindset: 3 steps to shaping the learning culture of the future