Blockchain is much more than just a cryptocurrency - We show it using the healthcare industry as an example.

Very many people have already heard of Bitcoin, Ripple, Ethereum & Co. Most of them know especially Bitcoin as a cryptocurrency. And Bitcoin was the first cryptocurrency based on such a technology, namely the blockchain. The hype around Bitcoin took new heights last year and early this year at the latest. Especially the price of Bitcoin, which reached over and over new hights, inspired many and made Bitcoin appear in the media as a permanent guest.

However, the blockchain is much more than just a cryptocurrency. Blockchain can be used to implement numerous different use cases. I would like to discuss a few from the fields of medicine, pharmacy and health here.

Health is a very important topic and so medicine and pharmacy is also an important and exciting area. It affects everyone at some point, some more, others less. Anyone who is dependent on medication must purchase it at the pharmacy. Almost every drug has its effects but also its side effects, which is what the package insert is for. The problem with this instruction leaflet is that it is not always available, because you may have misplaced it. Much more often, however, it happens that this is possibly not 100% understandable and you can not search directly in it. Sometimes the package inserts are so long and the font so small that it takes a long time to read them. However, older people in particular can struggle here if the font is too small for them.

If you are on vacation or on a business trip and need a medication, it can happen that this package insert with the side effects is written in a different language. So what do you do if you don’t understand this language? Have someone translate it for you? Or have it laboriously translated into text and then into the appropriate language with an appropriate IMG-to-text translator? It would be very helpful if this package insert with the sometimes not entirely harmless side effects could be digitized so that you could search for it more quickly and have it practically always at hand.

Not only could it be accessed and searched for from anywhere at any time, but the writing could also be improved. Faster and easier translation would be possible, or a selection of languages could already be provided. This would bring many advantages at once. The retrieval of this data could work, for example, by scanning a QR code. For offline availability, a corresponding app could be developed that keeps this data and information locally on the mobile device. Other possibilities would exist if the file was accessed once, if it was contained in the cache, or if it could be added to iBooks (on Apple devices) and thus always be accessible.

If this information is available in the blockchain, further information can be stored, such as intake recommendations. In addition to these advantages, there would be a much higher advantage, which every year several people die from and customs constantly have to fight. This is the issue of “counterfeit medicines.” Counterfeit drugs are put into circulation, whereby the effect is either non-existent or reversed, i.e. fatal.

People suffer health damage as a result and can even die from it. This trade could be put a stop to by means of the blockchain. This is because the entire transport route and production could be stored on the blockchain. When the drug is added to the pharmacy’s stock – or at the latest when it is dispensed – it could be scanned in using a QR code and checked for authenticity. The customer himself could also do this and thus check the authenticity of the medication. This would make it possible to trace where the medicine was manufactured and what the transport route looked like. Through certificates of authenticity and verification by means of this QR code and the corresponding mechanisms of the software in combination with the blockchain, containment would be conceivable.

Many things could be simplified:

Instead, this data would be available online or even via mobile device, so that some of the data would not have to be passed on. Instead, it could be used, for example, when talking to the doctor. Of course, this blockchain and the solution would have to be secured in such a way that only the patient and the respective doctor could view the data, possibly only for a limited time. This would possibly be possible if the doctor uses the patient’s crypto address. For increased security, a second factor could be used in authentication.

Another consideration, of course, would be to transmit certain data about the patient to the insurance company. Thus, the premiums could also be calculated, of course with the patient’s consent. Since doctors store all the necessary data, such as scans, X-rays, etc., on the blockchain, they and other colleagues could access this data much more quickly. Carrying or bringing CDs. Images or other documents would thus no longer be necessary. Patients would also be able to access the images and reports themselves, if necessary.

The entire communication and the whole process would thus be significantly accelerated. If only because, for example, after a scan or X-ray, the data can be stored on the blockchain and viewed by the family doctor, orthopedist or physiotherapist. All of this would remedy a lot, make a lot easier and automate some things, and there would be many more possibilities that could be implemented in the field of health and medicine.

It would also allow reminders of, for example, vaccinations to be created and sent to the patient. This would also be a help.

Conclusion on blockchain in medicine & healthcare

The blockchain is certainly not a panacea, but it can bring some important advantages when it comes to sensitive data and its storage and security. The issue of counterfeit medicines is a particularly important one and can be curbed by tracking and storing the transport route on the blockchain. For the blockchain patient record, the legal situation would first have to be reviewed. In addition, the choice of the right Blockchain technology is important. To date, this has not yet reached the stage where it could replace many “classic” systems, due to performance as well as resource requirements. As developments continue in this direction, this issue may also be solved soon. 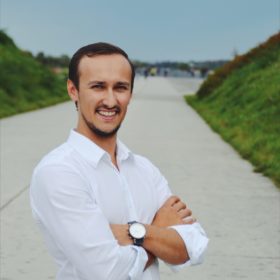 Driving digital change in the company in an innovative way

7 reasons why Hybrid Events will be the future

Online Marketing to Marketing Automation – Why Complicate When It Can Be…

Digitization without business continuity? Forget it!